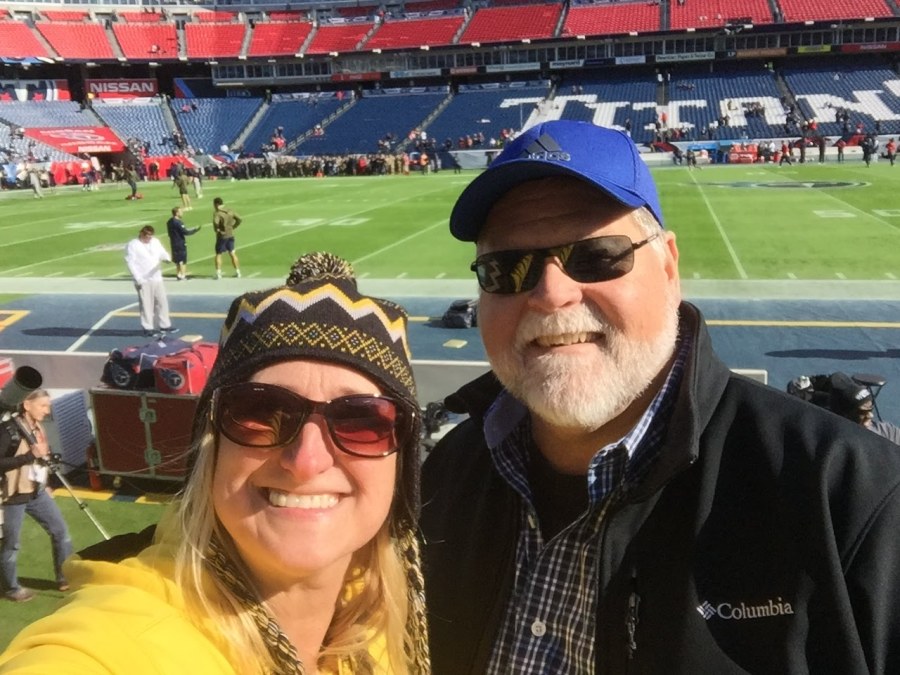 It’s been a few days since I’ve written a blog.  My weekend was super busy fulfilling a dream.

My heart has always belonged to Big Ben.  Can’t go wrong with yellow and black.  He’s one of the toughest quarterbacks on the field today.  He has played through many broken bones in his career, even now playing with a broken finger.  I had the chance to see him play in 2011.  Let’s pause for a moment while I reflect on that sweet November day…

My hunka hunka and I have seen many NFL games.  We love it.  Always seems like we root for opposite teams intentionally.  Fun rivalry.  We enjoy it for the love of the game.  Quarterbacks are my favorite position.  I love seeing elite quarterbacks, future hall of famers.  Love him or hate him, Brady is a fantastic quarterback.  I have had the privilege of seeing all of the elite quarterbacks of today, except for Brady…until now.

I was so worried Brady would be retired before I would ever get to see him.  He has come to Indy, but couldn’t afford any single game tickets.  Then I was excited he was coming to Nashville, but just couldn’t afford the tickets.  It’s heartbreaking.  I get it…season ticket holders want to make money so they increase their profits 400% by reselling their tickets.  Dang it.

Then an angel appeared.  I was gifted with tickets to see Brady.  Like for real.  I was still in shock all the way up until I entered Nissan Stadium, home of the Tennessee Titans.  I ran the first NFL 5K race at this stadium when they started those races finishing on football fields.  Doggone it, I would have placed 3rd if I hadn’t been so caught up in being on the field.  I slowed down to have a moment and see myself on the jumbotron.

We were given fantastic seats.  Oh my gosh.  We were there waiting in the cold for the gates to open.  I made sure to be first in line…first to my seat.   I watched anxiously for Brady to appear.  Edelman came out first.  I love seeing him out there.  Fast little booger.

But where’s Brady?  I’m waiting and waiting while I smell those oh-so-delicious stadium hot dogs walk by.  I had to control my desire and not rip one out of someone’s hand.  I haven’t eaten for hours, folks…stop taunting me.   I have to wait to see Brady first.  He takes precedence.   My hunka hunka saw cameramen gathering at the tunnel around 11:00.  Oh…it has to be Brady.

I’m like a little kid waiting for Santa to appear.  Like for real excited.  I can barely contain myself.

Here he comes.  Oh my gosh…I’m seriously in fan girl mode.  I cannot believe he’s right there on the field.  I think I may have shed a tear or two.  I’ll blame it on the cold wind blowing on me. 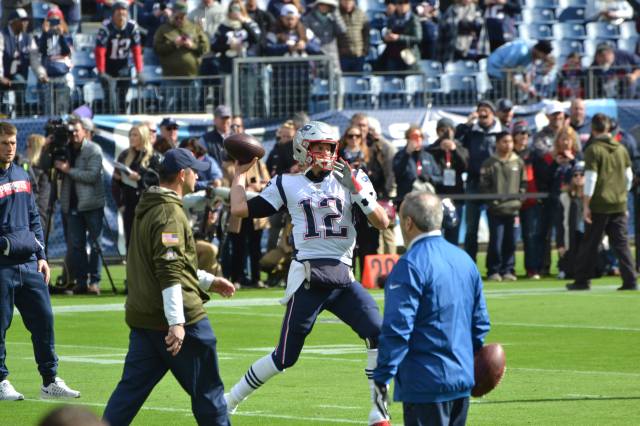 I also think I was speechless.  I know that’s a tad shocking for many right now, but it is possible.   I couldn’t stop watching him warm up.  He and Hoyer were throwing passes.  Then Brady and Edelman were playing catch.  Umm…hello, Tom…I’ll help you warm up.  I’m over here!

Now…Gronk didn’t play.   That punk.  His back and ankle were supposedly hurting, but I saw him standing through the entire game.  He should have been on the field.  Suck it up, buttercup.  Brady needed him.

Titans defense were all over Brady.  Titans played well.  Brady…not so much.  Titans deserved that win.  Throughout the game I was still in so much awe of knowing I was in the presence of greatness.   No matter who hates him, you have to admit he’s a helluva quarterback!

Brady knew he was beat at the end.  I wanted to console him, but that damn security has issues with people not part of the team to be down there on the bench.   I just sent warm wishes from my seat.

I feel like the luckiest girl in the world right now!  I’m so thankful and forever indebted to that special angel who gave us those tickets.  I know there would have been no other possible way for me to fulfill this dream.

Until next time…Peace out, Trout!

One last look at Brady…